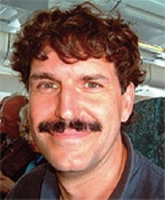 Education and Professional Experience:
Patrik Schmuki, born in 1960 in Winterthur, Switzerland, studied physical chemistry at the University of Basel (M. Sc., 1988), and carried out his graduate studies “Semiconductive properties of passive films” at ETH-Zürich (Ph.D. degree in 1992).

After an employment as Assistant at ETHZ (1992-1994) he worked at the Brookhaven National Laboratory, NY, U.S.A., using synchrotron techniques for thin film studies (1994-95).

From 1995-1997 he was guest scientist at the Institute for Microstructural Sciences of the National Research Council of Canada where his research focused on surface phenomena on Si and III-V semiconductors. In 1997 he was elected Maitre d´Enseignement et de Recherche (Associate Professor) for Microstructuring Materials at the Department of Materials Science of EPFL (Swiss Federal Institute of Technology at Lausanne).

He joined the materials science faculty at the FAU in the fall 2000.

Research interests:
Research at the Institute for Surface Science and Corrosion (LKO) led by Prof. Schmuki.

covers aspects of surface science and technology of materials, including electrochemistry, surface analysis, corrosion as well as micro- and nanostructuring. A wide range of characterization and modification techniques is used to study the degradation and functionalization of metal- and semiconductor surfaces and interfaces. Research projects at LKO are of a highly transdisciplinary nature and target fundamental as well as applied aspects.

LKO has established links to research institutions worldwide, collaborates with industry and it provides services in surface characterization and corrosion studies.

On the list of publications are, for example, numerous Nano Today, AngewandteChemie Int. Ed., JACS, Advanced Materials, Nano Letters, and Nature Materials. His research has been outlined in journal covers and his publications include many most cited papers.
h-Index: 72